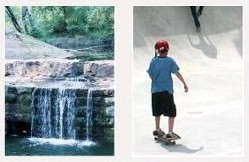 According to WalletPop, AOL’s consumer finance website, a study by NeighborhoodScout.com recognized Allen as the best neighborhood for the money in the Dallas metro area.

In the study, 20 metro areas throughout the United States, were ranked as the most desirable towns based on median home value and premium community qualities.

The City of Allen was named among MONEY magazine’s Best Places to Live 2010. The rankings are based on scores for jobs/economy, housing affordability, education, arts/leisure, and health. Allen ranked No. 19 on the 2009 list.

This town is a 30-minute drive from downtown Dallas, so it’s no surprise that many residents work in the big city. When not at the office, they have plenty to do right at home; Allen has a symphony, a ballet, malls, and even its own minor league hockey team.

Parents appreciate the top-rated school system and low crime rate. Their children appreciate MTV-featured “The Edge” — one of the largest outdoor skate parks in the nation.

Allen Ranks 9th Safest City in US for Second Year

(December 2009) – Allen Police Chief Bill Rushing recently announced that for the second year in a row Allen is ranked among the 10 safest cities in the United States. A City Crime Rankings study, published by CQ Press, a unit of Congressional Quarterly Inc., was based on the FBI’s 2008 statistics report. The report examined 393 communities with at least 75,000 people based on per-capita rates for homicide, robbery, rape, burglary, aggravated assault and motor vehicle theft.

In order to locate America’s best places to move, Forbes.com looked cities with populations over 25,000 comparing the number of people in each who were born out of state or abroad, who had moved there from a great distance over the last five years and who had moved based on their career. Forbes.com also compared population growth, family incomes, executives and professional jobs and home values.

With proximity of global employers nearby, state recognized schools, a booming retail and corporate development market and consistent home values, Allen is an excellent choice of cities for anyone wishing to relocate.

Homes for Sale by Subdivision